Nika Russia LOVE,  любовь in Russian, is an intimate portrait in photography, as well an extended series of interviews often conducted like prose, and an unpublished video-journal on the side, assembling a young woman’s life, Nika, and that of her friends living in Russia’s metropolis Moscow, most of whom are coping with HIV and their addictive past.

The project, in its essence, is an ode to friendship and hardships fought in Moscow’s daily life. Where love, warmth and the intimacy of friendship reigns as a sensorial antidote against the personal struggle of those within the HIV-community, remaining clean, and to safeguard a positive and activist position imagining one’s future, all the while living an underdog position within Russian society. All the same, the project is a remembrance of some of the young men and women portrayed, whom where unable to overcome their struggle with addiction, having succombed due to an overdose.

The project may have a pursuit in the nearby future, resulting in a documentary film A Russian Tale {of LOVE}, interlaced with the documentary photography project; the result of an intense collaboration between the two women throughout three years, from 2005 until 2007.

In 2011 a photographic essay was published by TIME, Lightbox, ‘Nika’s Journey Growing Up‘, by Ilse Frech & Paul Moakley.

Ilse Frech followed Nika, from 2005 until 2007, travelling and living between Moscow and St. Petersburg. During these years, both forge a relationship of trust, becoming a lifetime friendship.

This project was made possible through financial support (2005) by AFK Amsterdams Fonds voor de Kunsten.

From the essay, by Paul Moakley: [..] “During this time the photographer had her own moment of tragedy. Her brother committed suicide, and in that time, she had a realization about the project. “As much as I wanted to portray young Russian adults with HIV and AIDS in their intimate environment, showing their struggles, in life, love, and sadness, the project reflected my own struggle,” Frech says.

“I made endless amounts of photographs —working non-stop to show these young adults who had overcome their own struggle.” Frech felt she needed to find the answer to the question, ‘How come someone doesn’t want to live anymore?’ which was parallel to finding the answer to ‘What makes someone actually say yes to life?’ As Nika shared her own stories, their bond grew and the relationship between documentarian and subject became ambiguous and more personal.” 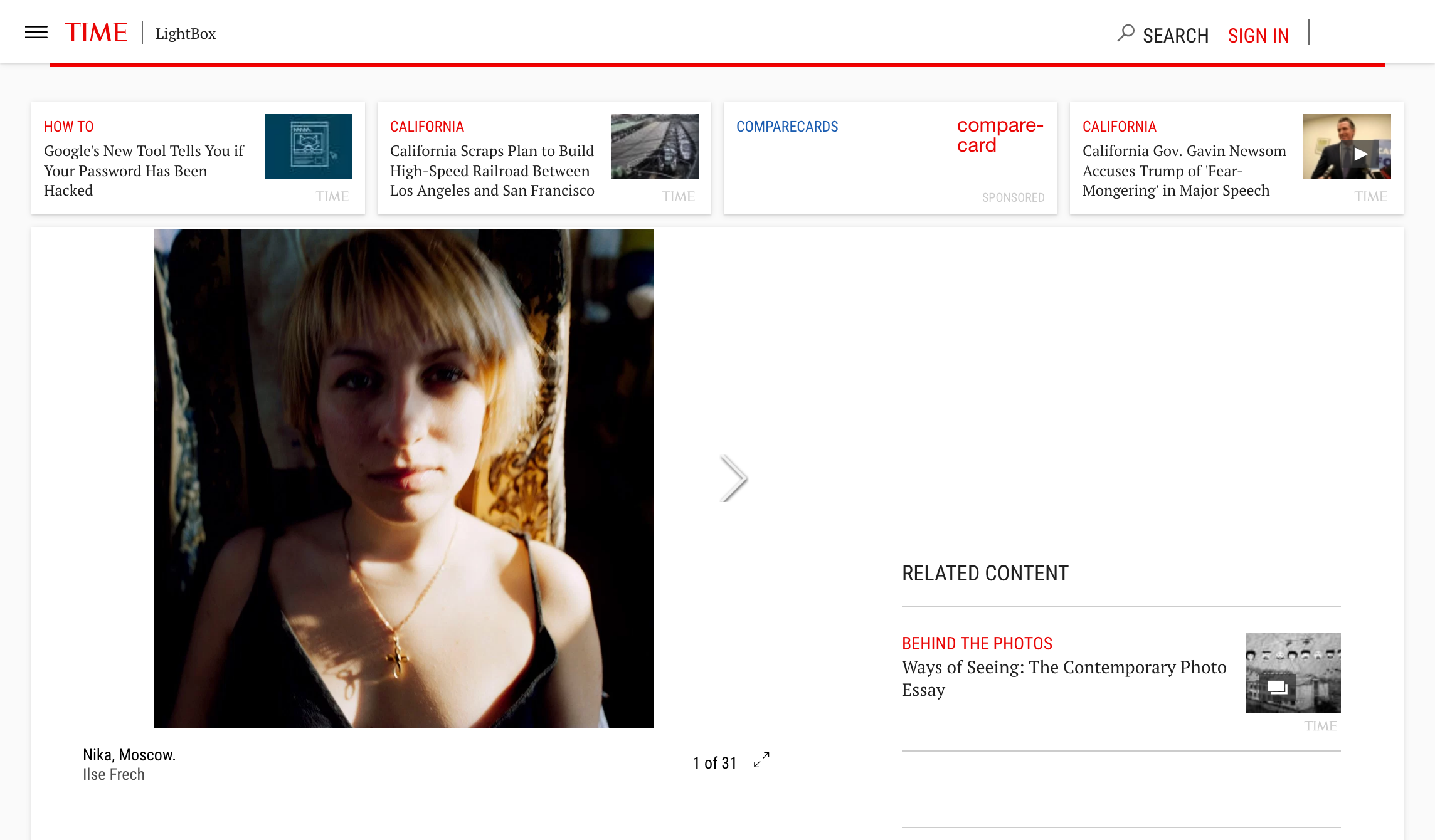 Ilse Frech followed Nika, from 2005 until 2007, travelling and living between Moscow and St. Petersburg. During these years, both forge a relationship of trust, becoming a lifetime friendship.

Nika and Masha, playing out a quarrel, Moscow.

Nika and Masha, playing out a quarrel, Moscow

This project was made possible through financial support (2005) by AFK Amsterdams Fonds voor de Kunsten.

I did not only wish to be admired, but to be famous, to be a star. Because I was lonely, and it was not enough just to have a few friends… I wanted to have more and more.

Z.: Yes. We started on the evening of Friday, and then we went to sleep on Monday in the morning.

I.: You stayed awake more than 48 hours on speed?

I.: You became philosophers?

Z. Oh, yes! (She laughs.) We spent 24 hours sitting and talking about our destiny, all this fucking world, all about…

Z.: I bought by myself, bought together with them, used with them and used by myself. And then, there was this situation… The drug dealer – as I bought drugs… He sold me drugs, a lot of drugs, but for a cheap price. For example, if I take a lot, he would cut the price, you know.

And I got a lot, and I used to sell by myself for an expensive price, and so I had money. This was my business. I always had money, and I always had drugs. It was convenient, because there was money and there were drugs… Again, with lots of people near me, I understood that if I had drugs, I could do what I wanted with these people, because they needed drugs.